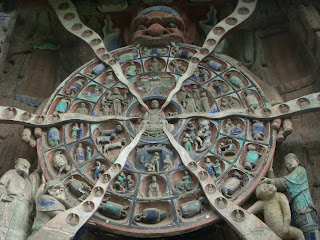 Last Tuesday Tomas awarded us with tickets to an organized trip to Dazu. Since I have not been there yet and Soha wants to see as much as she can here in China, we decided to give it a try.

Set off was at 8:00 from Nanping – Parksons. We had to wake up as early as 7 to make it there on time. Weather was not really good. All the night it was raining and in the morning slight rain remained.

Getting to the bus was already an adventure. We did not see it on the arranged spot and started to be worried. But the “organization committee negotiator” called us and explained. The police kicked them out of the parking spot and let them circle the whole block once again.

Eventually we ran to the bus and made it almost on time 8:20. First shock was that we were the only foreigners in the bus. Second, that the bus was almost empty. As we realized afterwards, the bus had more stops around Chongqing to pick all the passengers up. Which was maybe convenient but it eventually led into leaving Chongqing around 9:30 AM right after they moved all of us into another bus. 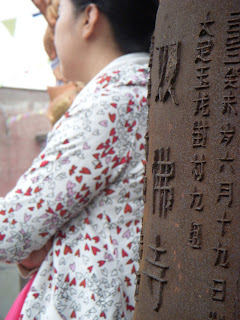 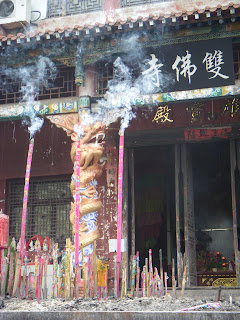 We even picked some people on the highway junction as we were leaving south of Chongqing. Finally all the people were on board and our lovely tour guide started to explain our daily schedule. Considering us the only English speaking in the whole bus, we had no chance to get it translated. But I must say we enjoyed the presentation very much even without understanding.

Soha was sleeping deprived and that means she was even more crazy than normally 😀 We made fun of almost anything at the bus and the sleepy people around. The pair right next to us was the most hilarious. Old couple around 70. They were sleeping on each other shoulder and when the bus stopped the old man slapped his wife super-hard to woke her up!! It was out of the blue, SLAP. But the lady woke up and no harm done 🙂 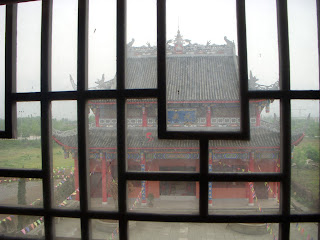 First stop, Shengshou temple. Preserved Buddhist temple with plenty to see and experience. We were offered an English guide in that place for 200RMB, but we did not went for that. It is a small area, with a rich history. While others were listening to the Chinese commentary I had a chance to get some pictures.

At one moment I wanted to capture a Buddhist monk giving a blessing and chanting for the rest of the group. As we went up the stairs and I showed my camera between the curtains…the monk just shouted, like it would be part of the chanting: “No pictures”…It was so funny we almost fell to the ground as we were laughing(silently) behind the curtain.

The road was pretty congested and our driver, probably a rally retired, was totally obeying Chinese traffic rules. Read as: Honking as much as possible!!!

Trip had decent timing though and our second stop in Dazu county to have a lunch was on time. If you never saw Chinese eating, you should definitely visit one such trip with provided lunch. 8 unknown people sitting around round table. Dishes ready to eat. In 30 minutes you will see nothing on the table. Except the last mouthful which is by the etiquette left to celebrate we have plenty. faster than your shadow the bowls are empty and the people gone out of the restaurant. Another thing that is very common. I don’t know if it is due to the extreme amount of people eating in the same time or a some other cultural reason, but everyone leaves the table right after he finishes his bowl. That does not necessary mean they will not wait for you. They will, but it is unorthodox. I am always the last one to eat. And as soon as I realize there is no one else eating and say “We can go” in millisecond everyone is away from table (AFT).

After our lovely guide urged me and Soha to move into the bus, all the people fell asleep. Seriously, everyone was snoring and dreaming. Did I mention, that the average age of our crew was 50…well now you know.

After 40 more minutes we finally arrived to parking lot, that seemed to belong to a tourist site. We stretched our limbs and put on bags in pursuit of UNESCO beauties in the beautiful county of Dazu. The old pair next to us took as personal responsibility to guide the foreigners and although we could not understand each other much, we felt very comfortable and taken care off. 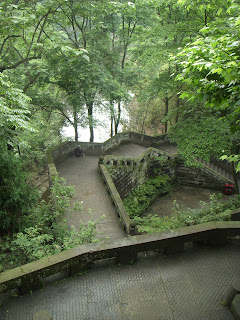 Along ghost town full of dogs, deserted market and locals arguing over a basket of fruits to the minibus. You can either choose to pay 5 RMB for the minibus to take you to the Dazu rock carvings and back(remember to save the ticket) or you can walk those 500 meters on your own.

Finally at the UNESCO site itself. Bao Ding Shan. The most beautiful heritage and unique carvings were created by a Buddhist monk in 1174 – 1252. This includes the 1000 handed Buddha carving, the largest reclining Buddha and an unique preserved Wheel Of Life carving. there are more than 10 000 carvings on this site. In year 1999 they were included into the UNESCO World Heritage. 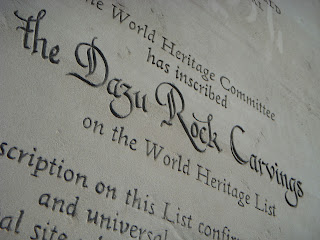 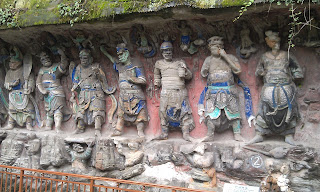 You can just stroll around and enjoy the beauty of this site. Especially the combination of nature and human work silently coexisting, making an unique harmony. This place must have been truly a great place for meditation in its times.

You can also hire local guide to give you tour with detailed explanation of the most important carvings. Taking you to the history of Dazu and explaining the circumstances why all this great work happened. Unfortunately those are only in Chinese. If you have a friend living nearby take him with you so he could translate.

All the carvings have dual language descriptors that will give you relative insight into the history of the specific carving and background of its creation.

We spent there almost two hours with Chinese guide. Although we could not understand some of the travelers translated many interesting details for us and we even tried to hit the hole in the carving site. It is just a silly custom, but they say if you can walk the 3 meters and put your hand on the hole, you are very lucky person. I am obviously not 🙁

Before we entered the bus all the merchants and gift shops we passed were relentless in they’re offerings. If you really want to buy some souvenir I strongly advice to bargain hard. Do not hesitate to offer just 20% of what they are asking for. 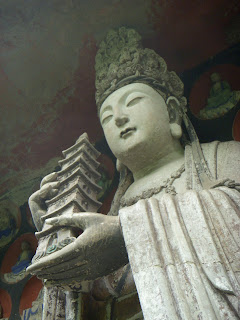 Now the glitch of a cheap trip finally revealed itself. Considering we payed only some 250 RMB for the whole trip, we knew there has to be a catch in that (The ticket itself was 140 RMB.) Before we properly left the site guide drove us into a local “Marketing presentation”. All of the travelers were seated in a room and before we realized whats going on, middle aged lady was overloading us with information about super mega amazing cutters, manufactured from the best steel ever invented. Purchase 1 get 3 free offers, the never ending classics of such presentations and many more tricks were executed. We held ourselves not to laugh again and eventually not to sleep.

We smiled, we nodded, we left. Chinese unfortunately are not that resistant. Direct NO is not incorporated in their dictionary and they are always trying to comply. Especially the older generation I guess. Well before we left the site, the company selling ultra-mega super best cutters in the world made a good business. Even I was tempted to buy this peeler for 20 RMB since I have none at home. But I withstood their last attack directly in our bus. UFF…

Day was long, and the road full of cars. I am not sure if we changed the driver or he became also tired, the truth is he was honking much less and we had chance to sleep. Which we totally used.