From crowds and masses at the Jie fang bei (解放碑) district through tranquil teahouse in Pipa Park to cold champaign and wild WELCOME in front of Parkson’s plaza we experienced it all in Chongqing during the birth of year 2013.

First we decided to have something to eat in the city and since Zenia was on a hunt for minor souvenirs we strolled around Jiefangbei (解放碑) area already in the afternoon. At 2 PM we successfully arrived to the heart of Chongqing. The day was bright and Sun is showing us its face for 3 consecutive days…which here in Chongqing is not common phenomenon. Exiting Subway station Jiao Chang Kou (较场口) we are heading straight to the People’s Liberation Monument or Anti-Japanese war monument in the middle of Jiefangbei. Streets are swarming with people, colors and smells. Tomorrow 1.1.2013 there will be a state holiday in China and people have time to go downtown for shopping in post-Christmas sales.

While searching through the stores for simple Christmas gifts and waiting for Thomas to join us, we discovered a few luxurious shops on the area. Mont Blanc, Omega, Luis Vuitton and few others. As Crazy as we are, we decided to kill our time in those shops pretending we want to buy a thing or two. I was dressed as a terrorist as girls always address me when I am wearing my keffiyeh. 2 beautiful girls behind me and we are stepping into Omega. Mingling around a bit, till the attendant asks us what would we like to have. Without hesitation the girls replied they want something with diamonds 🙂 We checked out 2 pairs of watches. They seem a little too ordinary. They have diamonds but simply does not look too expensive…in fact they are not. Only 78 000 RMB.
We are asking for something more shiny with diamonds. Zhenia and Mandy end up with watches worth a little less than 800 000 RMB on their wrists. The game is tight, seriously, looking like we are going to buy those wrist watches. An escape strategy is necessary. “Those we saw in MB an hour ago were more fitted better than these, what do you think darling..? Yes, you are right honey, they were much more fit and better color.” Girls caught up with me and we played it all through to the end. Eventually “Or you know what my darlings, we can always drop by in Hong-Kong on our way back.” “Or maybe we could visit New York to look for something really special!”. Temperature is rising high and our sarcasm is getting more and more obvious. I am taking both ladies for their hips and leading them out of the store wiping off sweat out of my forehead.

Finally Thomas arrived and we can head to Pipa Mountain Park. Something grilled for food and one metro station away at Qi Xing Gang (七星岗) we are encountering completely different surroundings. Low buildings, people sitting calmly on the street, eating traditional home cooked meal, feeding their pets, attending their chores…contrast with busy and posh Jie Fang Bei is immense. All of this sights are bathing in late afternoon sun light giving it even more romantic touch. Moving up to the top of a hill straight to Pipa Mountain Park makes us all a little less stressed and a little more happy. Watching sunset from top of the mountain with friends, breathing fresh air and regenerating before upcoming NYE. Hmmm, life smells good.

After a late afternoon tea and pleasant conversation in the local teahouse, where we also successfully exploited their Wi-fi connection to update our smart phones, we head in to the city to take MRT and get back to Nanping (南平).

Plan was to buy somewhere Champaign and before the midnight pop it up in front of the Skyscraper I work in. It’s not hard to find here in Chongqing a western supermarket. What is actually hard is to get the goods you are used to buy in there. We strolled one Wall-mart in the proximity of Parkson’s but without success, so we decided to hit Carrefour instead. It’s closer to the 26 LOFT bar we intended to hang out before midnight comes and has more variety of goods anyway. Entering Carrefour around 20:30. First stop – toilets. I got used to the “quality” of lavatories here in china, but still my expectation were higher when entering one in a shopping mall. No soap, cold water, very dirty closet (Turkish style of course). In the store we are heading straight to Alcohol shelves and finding there only 3 different types of bubble wine. Martini style for 130 RMB, Champaigne fro 380 RMB and some bubbly wine for 260 RMB. We trust the brand and picking Martini. 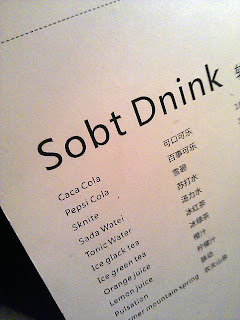 In 26 Loft bar full house is already waiting for us. People are playing darts, pool, air-hockey, table-soccer and even console games located in the first floor. We are forced to order a drink for at least 50 RMB each. I am choosing my favorite White Russian, Thomas has straight whiskey and Mandy tries Scorpion. Before the drinks are prepared we have some time and play football match. The winner is my humble self and Mandy screams whenever her goalkeeper fails in his job.

Chinese knows how to enjoy their time. Although they do not celebrate that often and dont drink that much, when they are out and having fun, it has style. Groups of 6 and more young people are having their own table and waiter, drinking a lot. Thing I really like in here is they play games. All the time and everywhere. Drinking games are very popular. Before we finished our drinks, there were 3 games already on. Dancing gamngnam style in a group. Singing competition and also a contest in drinking beer. The one who finishes the beer first is a winner and in this one I am laughing out loud cause this contest takes seconds in Czech, while here the winner made it in matter of minutes. 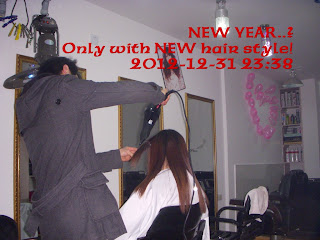 23:20 – Its time to head home and pick up our supplies of Beers, champaign and wish Lanterns.

23:40 – We are heading back to Nanping through my neighborhood and in at the hairdressers is sitting a customer. Middle aged woman is getting her hair done. NOW?! Seriously. 20 minutes befor ethe end of 2012. In the middle of a night. I could not resist and had to take a picture of such scene.

23: 50 – Big Clock in front of Parkson’s Plaza in Nanping are showing 10 minutes to 12. Chongqing is turning to the new year and we are still handeling our Lanterns. I can not help myself to think about the “Chinese goods” you can get all around the world. Its cheap, its everywhere and does not work. It was real fight to get my lantern in to the air.

23:58 – While Thomas Lantern was burning down, me and Mandy are successfully sending our Lanterns towards their destiny. Wishes written on them might come handy to those they will fall onto. I am getting pretty drunk. But the bottle of champaign is still waiting for us.

00:00 – Maybe we were a little late but we popped our champaign ehh Martini and enjoyed the moment. Actually all the passersby were enjoying it with us, cause we were shouting our wishes in different languages.

00:30 – Bottle is empty, our throats are sore …time to head for music fun in the melting pot of Jie Fang Bei. Catching a cab and heading to the center. Opening one more beer and singing songs…

Well it all continues….Clubs, drinks, dances, music…you know the drill…went to bed just before the sunrise.