Last April day we decided to take the opportunity and join the local group in their activity. Free water swimming club invited everyone to join them and swim in the mighty Yangtze river right in the middle of Chongqing. Start was at the Coral Dam in Yozhong district also known as Shanhuba. 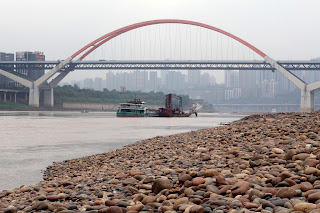 I tried to advertise this event for more than a week on my QQ profile message board, but the only replies that came were WARNINGS.

“Hay man, are you CRAZY!!”
“Hey Holistr, are you serious…the river is dirty.”
“BIOHAZARD man…don’t go to that river!”
“Nope, I will not join you for the swim…the river is dirty!!”
“Do you want to catch some disease?!”
“Just don’t drink it…not even accidentally.”
“Take a hot bath with detergent after the swim;-)”

Well…after a week of massage with such messages I was really worried about it. Social pressure works perfectly. I really considered not to go to the river. Had even a bad dream about getting a nasty skin disease.

Well Soha was the only one person that encouraged me and was even flirting with the idea to try it with me. Also George who joined us in the last moment with his camera was encouraging and challenging me to go for it.

Since Robin and all his crew were extremely opened and nice people, I could not let them down. Invited and heartily accepted among them I was part of the swimming without even noticing. 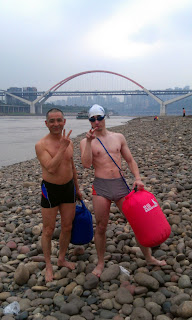 From the “medicine man” I bought waterproof bag for 30RMB and along with others stuffed all my necessary belongings into it. It is 30 liter orange bag that floats and looks like a boy when in the river. Towel, shorts, socks, shoes, glasses, and T-shirt. The rest was taken care of by my friends, who took the distance on foot at the Shanhuba pebbly bank.

I followed the drill – warmed up, stretched and massaged my legs. Pebbles on the coast of Shanhuba are slippery and one should take better shoes than just slippers to walk on them. From the Shanhuba bridge above it does not look like but Yangtze river stream is strong in here. I was strongly advised not to drift to the center of the stream and keep only a few meters from the bank.

Water was considerably cold. Around  20 degrees. Man how I was regretting my decision when my belly touched the cold river surface :-/

Stream is really strong and I didn’t even had to swim much. But with the water temperature it was necessary. One minute to get used to the water, few temps against the stream and we were ready to go. Actually after trying to swim against the flow of the river you will finally realize how strong it is.

We made it from the west to the east. No more than a 500 meters in Yangtze.From my personal point of view…the river is no more dirty as any other big river. Like Nile, Danube or Vltava. Was paying a good attention not to get a sip and the occasional fish hitting your leg is also pretty suprising:-) 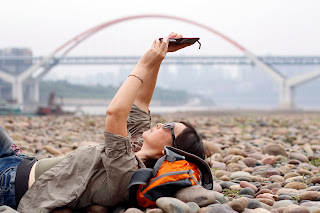 Watching the Shanhuba bridge I regularly use to commute to the city center from down there, laying on my back, enjoying serenity of the mighty Yangtze river, embraced in silence and carried away by the stream…Unforgettable experience!!!